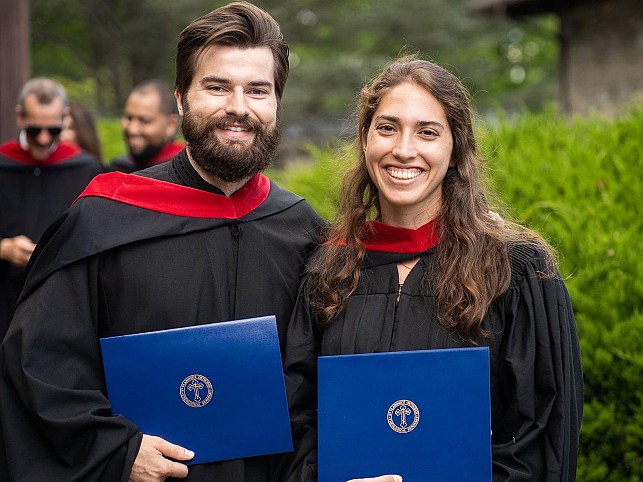 Father Kosmas Morfas was born in 1995, and raised in Carmel, Indiana. During the summer before college Fr. Kosmas felt a calling to serve the Church as a member of the clergy and subsequently enrolled as a Religious Studies major at Hellenic College Holy Cross School of Theology in Boston in the Spring of 2015.

While at Hellenic, he met Catherine (née Alexandres), who was participating in Hellenic College’s “Semester of Faith” program during her time as a student at UCLA. Both of them then attended and graduated from St Vladimir’s Orthodox Theological Seminary in New York. They were married in December of 2019.
As a student at St Vladimir’s, Fr Kosmas headed up the seminary’s athletic club, the St Demetrios Society, as well as the Orthodox Inter-Seminary Movement, which seeks to foster fellowship between Orthodox seminaries. When not in church, both Fr Kosmas and Khouria Catherine enjoy reading, playing sports, and hiking.

A parish of the Antiochian Orthodox Christian Archdiocese of North America.